Governor Kidero apologizes for his actions

After the showdown that took place 2 days ago where Nairobi Governor “killed a mosquito ” on the face of Nairobi Women Representative Shebesh, he has been able to offer a public apology. He termed the incident as an act of aggression. Indeed it showed a side of him  we the public have never seen or known to exist since he looks like one well soft spoken man. 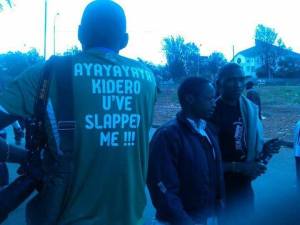 On Shebesh side, we expect to see her storming another persons office soon enough but this time she will be careful. A while a go rumor was that Ferdinand Waititu once punched her on the face after she accused him of pocketing money belonging to their political party TNA. My stand on the issue though doesn’t change that he didn’t have the right to slap him neither does any man anywhere need to do the same.

Here is the press statement issued by City council:

View this document on Scribd

Blogger. loves writing about anything in my mind.
View all posts by diaznash »

In Between Absoluteness and Partiality

Wellcome to my blog my name is Beth i live in Wales in the UK its full of green grass and lots of hill oh and sheep haha.i wanted to start a blog so i could write about my life , my journey on finding my self , my kids and anything that is on my mind which could be anything from make up , men , chocolate ANYTHING. I suppose its sort of like a dairy.i dont get to spent as much time as i would like on here but starting from today i am going to make the time even if its for just 10 small moments

Tales Of An Afrikan Sun

It is never that serious